Is it time to go orphan?

Over the years, numerous of investigations and articles have analyzed the likelihood of a drug’s approval per each phase of the clinical development. Latest in line is the Endpoints’ piece PhI may still be a killing field of failure but PhIII success rates have surged, signaling tectonic shifts in biopharma R&D. Endpoints conclude that the statistics haven’t changed much over the years – with one exception: the likelihood of success for Phase 3 trials has increased. But why is that and what difference does it make to an investor?

Endpoints news base their article on an analysis from The Centre for Medicines Research (CMR) international that was published in the top tier journal Nature reviews earlier this month. According to Endpoints, the data show that the success rate of all drugs making it from Phase 1 to market is 6-7%. This has more or less been constant over the past decade. For all drugs entering a Phase 2 trial, only 15% make it to the market. This number increases to the modest 62% when looking at how many Phase 3 drugs reaching the market. A decade ago, however, the success rate was only at 49%. 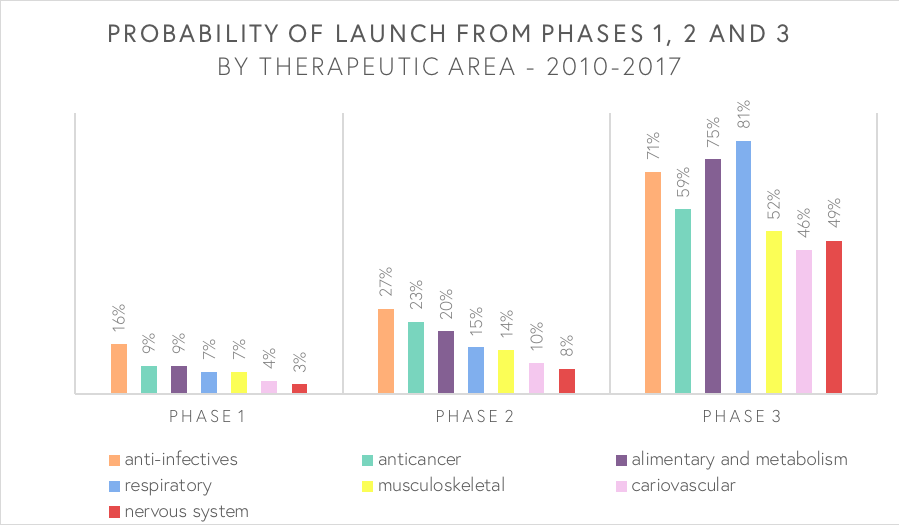 The CMR analyst found two key trends behind the increase in the Phase 3 success rate:

1. Big Pharma has become better at concentrating their last-stage resources

CMR argues that a dip in the number of drugs entering Phase 3 suggests that the big players have become better at concentrating their last-stage resources on therapies with high chance of success, i.e. Big Pharma has become better at selecting successful molecules. Based on our experience, however, we find this unlikely. Although, there might be some truth in that increased competition and stronger shareholder demands have limited Big Pharma’s freedom when it comes to what they can invest in.

The second trend identified by CMR is an increased focus on rare disease drugs. To us, this sounds like a more likely explanation as most industry experts believe that orphan drugs are more likely to succeed. We see several explanations behind this, such as higher success rate, where a few is the simpler underlying statistics, more help from authorities, major clinical needs and few existing treatments available. Both Hay et al. (2014) and a report on Clinical Development Success Rates 2006-2015 also conclude that orphan drugs have a higher success rate across all three stages of pharmaceutical development. According to Hay et al., orphan phase 3 success rate in 2014 was 66.9% compared to 60.1% across all indications. In other words, this increased focus on orphan drugs is supported by our own experience, as well as previous literature.

If you are choosing between investing in the execution of a Phase 3 study targeting a common disease or a rare disease, the latter should in the long run provide a better return on investment.

Conclusions: Should you go orphan?

Statistics on large groups are always difficult to apply on the individual case. Based on CMR:s statistics, previous literature and our own experience, our conclusion is that this evidence base indirectly imply that if you are choosing between executing a Phase 3 trial targeting a common disease or a Phase 3 trial in a rare disease, the latter should in the long run provide a better return on investment. This applies just as much to managers prioritizing between existing products in their portfolios as to retail investors choosing in which company to invest. For drug developers, this means that rather than going for one of the world’s most common diseases, it could be strategically-wise to focus the effort on a small niche indication.

One example of a company that choose the orphan way is Oncopeptides. In 2015, Oncopeptides announced that both FDA and EMA had granted Orphan Drug Designations for the company’s lead candidate melflufen, in the treatment of multiple myeloma. In addition, the company recently announced an intent to apply for accelerated approval in the U.S. and are currently conducting four parallel clinical studies.