By MSC Nordics | Infographic, What's the deal | No Comments

During the month of October, the world turns pink in dedication of Breast Cancer Awareness Month.  Each year, an estimated 1 million cases of breast cancer are diagnosed. Of these, about 10-20% is the aggressive form triple negative breast cancer (TNBC). Unfortunately, the standard chemotherapies have shown to be ineffective on TNBC thus we were curious how the drug development pipeline looked like for this particular subgroup of breast cancer, TNBC. 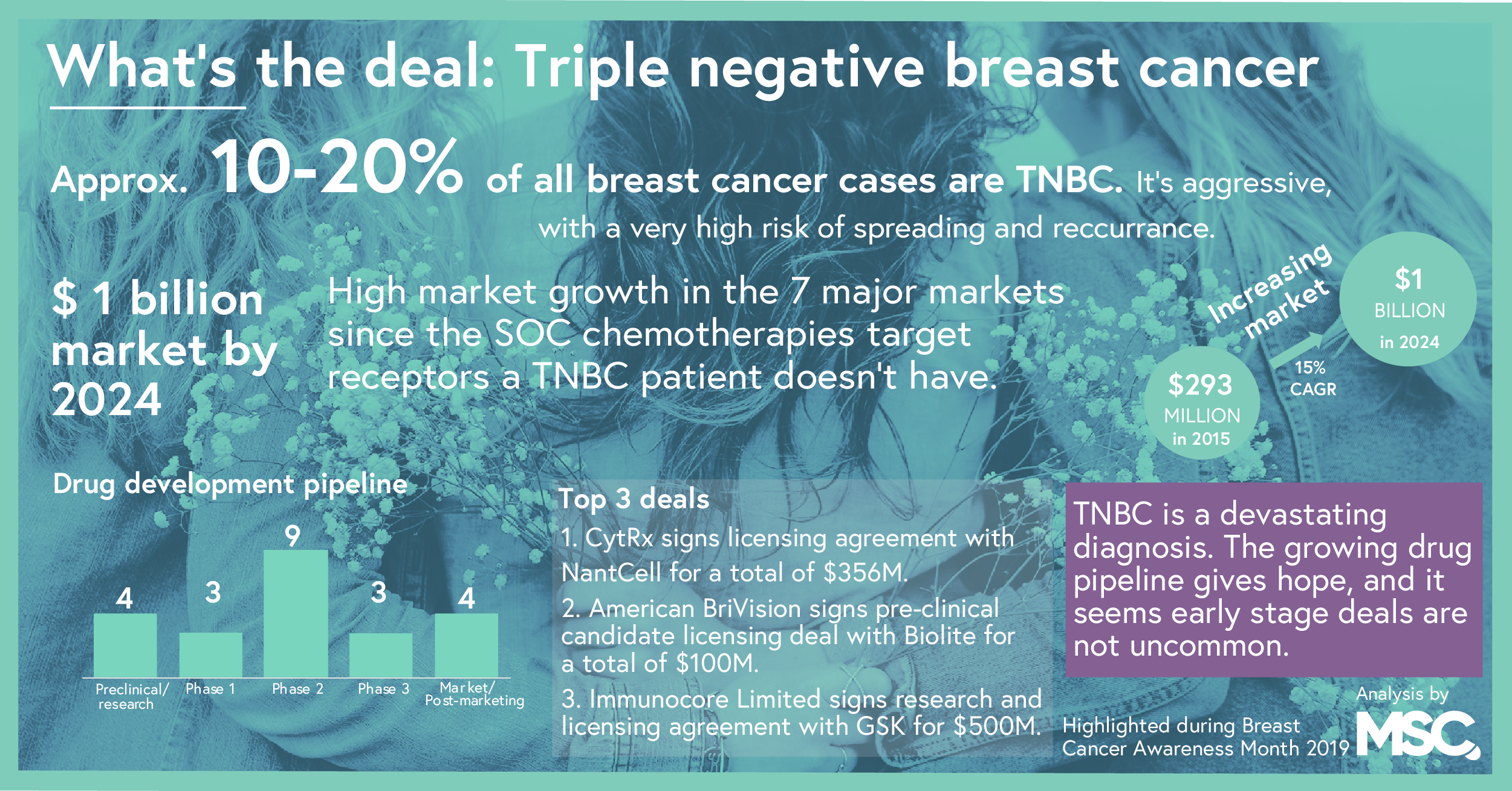 The market for TNBC is projected to reach 1 billion USD by 2024 across the US, Japan and five major EU markets. Currently, the only treatment option is the standard chemotherapy, why there is now a big interest in finding new treatments. Primary drivers of this rapid expansion include the introduction and uptake of next-generation targeted treatments and immunotherapies. Poly (ADP-ribose) polymerase inhibitors and programmed death-1 (PD-1)/PD ligand-1 inhibitors are expected to be the best-selling classes of drugs over the next few years.

What is triple negative breast cancer?

TNBC is an aggressive type of breast cancer, where not only the risk of the cancer spreading is very high but also the recurrence rate. Breast cancer tumors where the cells are negative for the three major receptors most known as the driving factors behind a majority of breast cancer; estrogen, progesterone and HER2 receptors are classified as triple negative. Notably, studies have shown it to more likely to affect younger people, Hispanics, African Americans, and/or those with a mutation in the BRCA1 gene.

Gap in the treatment landscape

Many of the common therapies for treating breast cancer, such as Tamoxifen or aromatase inhibitors in hormone therapy and drugs that target estrogen, progesterone and HER2, such as Herceptin and Tykerb, are quite ineffective, as triple negative tumors lack the receptors necessary for responding to the treatment. With chemotherapy being one of the few effective treatment options, there is a big interest in finding new drugs for this aggressive disease.

Scleroderma: a rare disease without treatment

By MSC Nordics | Infographic, What's the deal | No Comments

June 29 marks World Scleroderma Day, a day focused on letting everyone affected by Scleroderma know that they are not alone. While rare, this devastating disease is characterized by a scarring of the skin and internal organs, with consequences raging from mild and esthetical to death. Still, no treatments have been proven to affect the underlying disease process and thus, we decided to ask: what’s the deal with Scleroderma?

Scleroderma is a rare rheumatic disease characterized by fibrosis of the skin, internal organs and vasculopathy. It is estimated that around 2.5 million people in the world suffer from it, and depending on where the fibrosis occurs, symptoms varies from mild, such as localized skin thickening, to life-threatening, where manifestations of the disease include interstitial lung disease and renal failure. While the disease affect adults across the life spectrum, the peak age of onset is between 40 and 50 years of age and within three years of diagnosis, about 50 percent of patients have developed major internal organ complications or deceased. The median survival time after diagnosis is 11 years.

Today, there are no proven therapies for the underlying disease process. Instead, drugs that suppress the immune system, such as corticosteroids and methotrexate, are often used to treat patients with severe scleroderma symptoms. This is not entirely unproblematic, however, as a recent study suggests that such treatments should be used with caution in patients with lung disease – something that may affect up to 80% of all scleroderma patients.

Over the past couple of years, there have been several breakthroughs in terms of the ability to treat specific internal organ complications, i.e. the effects of the disease rather than the underlying disease process. Still, the number of treatments in pipeline are relatively few and primarily centered around Phase 2. A number of Big Pharma players have however shown interest in the field, including Merck, Boehringer-Ingelheim, Sanofi, Novartis and Johnson & Johnson. This suggests both that a treatment of the disease process could be near and that anyone who can present such treatment could be able to catch the interest of some pretty big investors.