January marks the Thyroid Awareness Month, a period of year dedicated to raising awareness about the surprisingly many problems related to the thyroid – a gland located in your neck. Recognizing this little-known rare disease, we took a look at the deadliest problem of them all: anaplastic thyroid cancer.

Thyroid cancer is a cancerous tumor on the thyroid gland and while the condition still is relatively rare, we found that the incidence rate is almost tripling with every decade. The vast majority of these tumors are curable but between 2-3% of all thyroid cancer tumors are refractory to standard treatments. These highly aggressive and often deadly tumors are known as undifferentiated, or anaplastic thyroid cancer (ATC).1,2

An introduction to ATC

The cause of ATC is still unknown although the disease sometimes arises where other, less mortal, forms of thyroid cancers are present. In only 10% of all cases, ATC presents with the tumor confined to the thyroid.4 But most commonly, it is presented with distant metastasis, mainly in and around the patient’s lungs. This is the main reason of the high mortality rate. After diagnosis, the median survival time is six months, with 1 in 5 patients still alive after one year.1,5 This high mortality rate, close to a 100%, combined with a sudden onset and rapid progression, classifies ATC as one of the deadliest and most aggressive human cancers.3,4 To make matters worse, effective treatment strategies for ATC are still lacking.

As ATC is a rare disease, several interesting opportunities lies ahead for a drug developer.

The current first-line treatment for ATC is surgery in combination with radiation therapy. But because ATC often present as inoperable, a combination of targeted chemotherapies is often the best viable treatment prescribed. The best outcome, i.e. the longest median survival, is achieved when surgery, radiation and chemotherapies are combined. One small case study (here) was even able to show that one patient was disease free 43-months after being treated with this regimen. Today, there is only one approved disease-specific treatment on the market and one disease-specific drug candidate in development.2 Thus, while there are treatment options available for ATC patients, none provides an ideal outcome.6

For drug developers, there are several interesting opportunities in this rare disease space. First of all, as ATC is such an unusual but deadly disease with few treatment options, a novel therapy has the potential to obtain an orphan drug designation, which can provide numerous monetary and fast-track development benefits for the drug developer. This, as well as additional regulatory incentives such as U.S. FDA’s priority review and breakthrough therapy designation have previously been granted drug candidates for ATC treatments, why these regulatory incentive programs constitute promising tracks for drug developers.

Another approach was used by OxiGene (now Mateon Therapeutics) and Danish Azanta that in 2011 partnered to bring OxiGene’s ACT drug Zybrestat to the market through the regulatory pathway of compassionate use. This approach meant that patients with few, or no, other treatment options could get access to the drug while it was undergoing the Phase III trial, i.e. before achieving  marketing approval. Unfortunately, however, the development of the drug was stalled and the agreement ended in 2014, leaving room for other drug developers seeking to try their therapies in this rare disease field.

At first glance, ATC may not be an attractive opportunity for drug developers due to its combination of low prevalence and the need for multidisciplinary therapy treatment. However, thanks to alternative regulatory pathways such as the opportunity to obtain advantages through initiatives such as orphan drug designation or compassionate use, the field is becoming more attractive for drug developers to through their efforts into. According to Orpha.net database, the market value is expected to increase with a steady growth rate in the upcoming years. 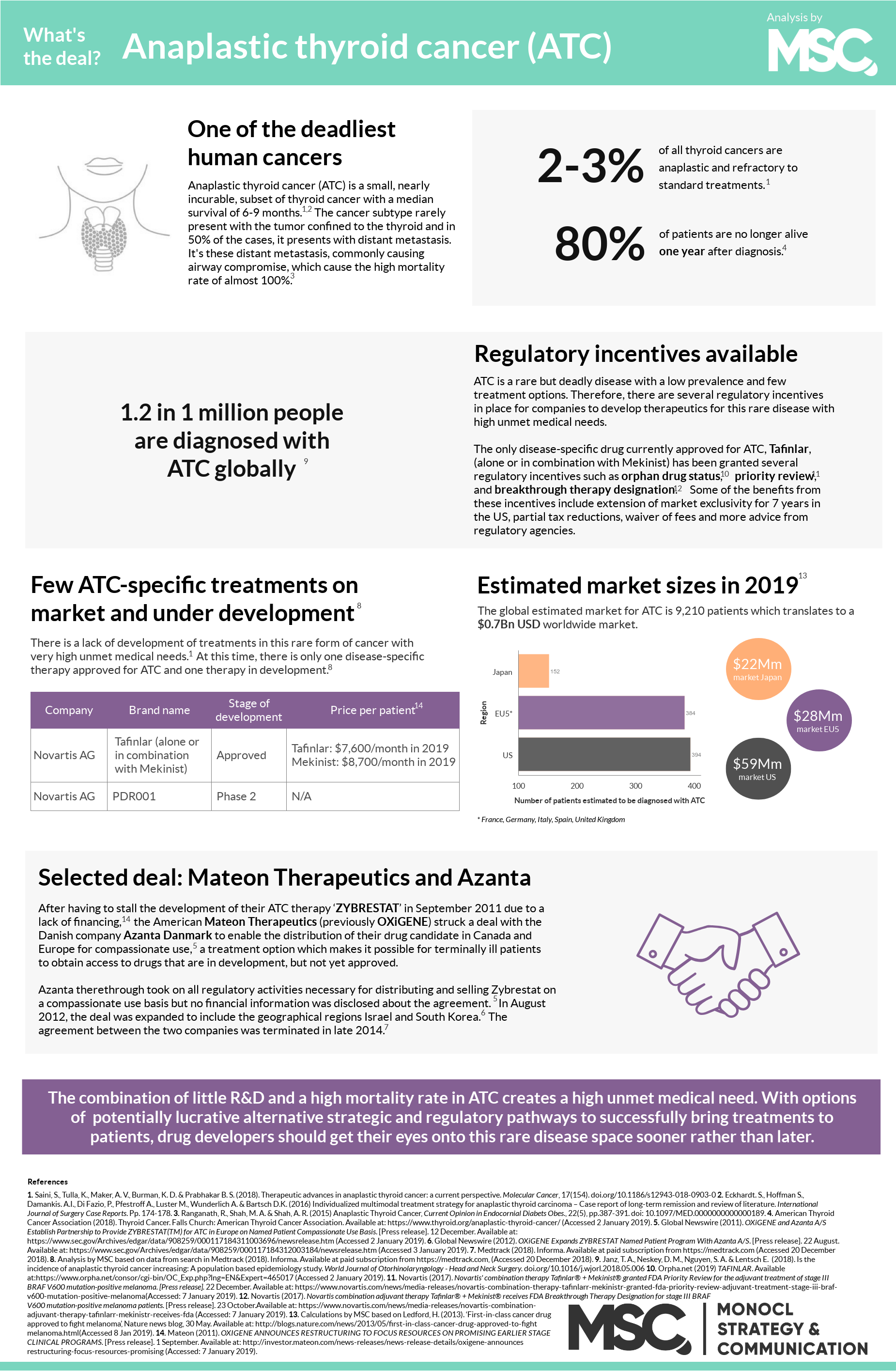